Carolina Septic remains open during this time and is still proudly serving all our surrounding communities that we call home. We have implemented our own safety procedures and are closely adhering to the CDC’s guidelines and recommendations. 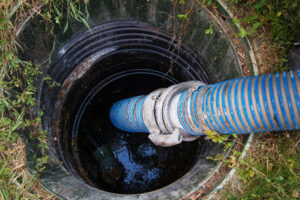 You’d be surprised at the things found in a septic tank. Or maybe you wouldn’t. These days, strange things are happening everywhere, and that includes the odd things put into septic tanks that don’t belong there.

It all comes down to this: what goes down your drains… Ideally, it should just be fecal matter, urine, dirty water and the occasional toilet paper, right? But people seem to want to put all sorts of things down the drain, and there are some things that do not belong there, for sure.

Keep Your Septic Tank Running Smoothly By Keeping These Things Out!

For starters, if you like to eat meat such as bacon or burgers, chances are you have some grease to dispose of, and it’s convenient to let it go down the kitchen sink drain. But that’s a no-no. Grease does not break down over time! It ends up clogging and/or blocking your pipes, leading to bad problems that are costly to fix. If you have grease, put it in a glass jar and throw it in your trash instead of down the drain!

Next, people tend to pour hazardous chemicals down the drain, which end up in the septic tank, and that’s another no-no. Chemicals can leach out of your septic tank and into nearby soil and groundwater, contaminating it. Don’t light a match outside near the tank if you want to avoid starting a possible fire. Meanwhile, those chemicals can interfere with how the septic tank naturally works. Tanks have bacteria that break down waste and keep the system working well. This bacteria doesn’t do well when bleach, motor oil or pest control poisons are put down your drains.

Thirdly, people think nothing of letting kitchen scraps go down the drain, but those scraps belong in a compost heap or your trash bin. They don’t belong in your septic tank.

Finally, what are some other things that are bad for your septic tank system? That would be diapers, cigarette butts, banana peels, condoms and used sanitary napkins. Septic systems are for human waste and not much else!

If you need to clean out your septic system, learn how Carolina Septic Pro can help.